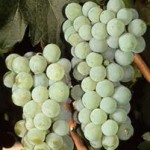 Sauvignon Blanc is a green-skinned grape variety which originates from the Bordeaux region of France. The grape gets its name from the French word sauvage (“wild”) and blanc (“white”) due to its early origins as an indigenous grape in South West France. It is now planted in many of the world’s wine regions, producing a crisp, dry, and refreshing white varietal wine. Conversely, the grape is also a component of the famous dessert wines from Sauternes and Barsac. Sauvignon blanc is widely cultivated in France, Chile, Australia, New Zealand, South Africa, Brazil and California.

Depending on the climate, the flavor can range from aggressively grassy to sweetly tropical. Wine experts have used the phrase “crisp, elegant, and fresh” as a favorable description of Sauvignon blanc from the Loire Valley and New Zealand. Sauvignon blanc, when slightly chilled, pairs well with fish or cheese, particularly Chèvre. It is also known as one of the few wines that can pair well with sushi.

Along with Riesling, Sauvignon blanc was one of the first fine wines to be bottled with a screwcap in commercial quantities, especially by New Zealand producers. The wine is usually consumed young, as it does not particularly benefit from aging, except for some oak-aged Pessac-leognan and Graves from Bordeaux that can age up to fifteen years. Dry and sweet white Bordeaux, typically made with Sauvignon blanc as a major component, is the one exception.

Sauvignon Blanc is currently produced in over 435 California wineries, including Alma Sol in Simi Valley, Cornerstone Cellars in Yountville, and Firestone in Foxen Canyon.