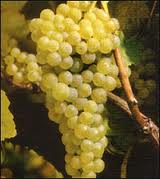 Albariño is a variety of white wine grape grown in Galicia (northwest Spain), Monção and Melgaço (northwest Portugal), where it is used to make varietal white wines. Albariño is now produced in several California regions including the Santa Ynez Valley, Clarksburg, and Los Carneros AVAs.

The grape is noted for its distinctive aroma, very similar to that of Viognier, Gewurztraminer, and Petit Manseng, suggesting apricot and peach. The wine produced is unusually light, and generally high in acidity with alcohol levels of 11.5–12.5%. Its thick skins and large number of pips can cause residual bitterness.

Albariño is currently produced in over 30 California wineries, including Crü Wine Company in Monterey, Marimar Torres Estate in Sebastopol, and San Pasqual in San Diego.