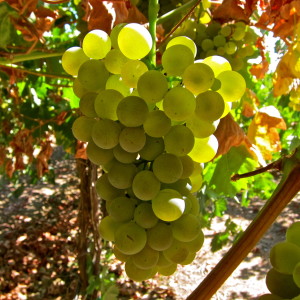 Vermentino is a light-skinned wine grape variety, primarily found in Italian wine. It is widely planted in Sardinia, in Liguria primarily under the name Pigato, to some extent in Corsica, in Piedmont under the name Favorita, and in increasing amounts in Languedoc-Roussillon. The leaves are dark green and pentagonal. The grapes are amber-yellow and hang in pyramidal bunches. The vines are often grown on slopes facing the sea where they can benefit from the additional reflected light.

Vermentino grapes are typically used to produce light, attractively aromatic wines with refreshing acidity and leafy, lemon-tinged flavors. In contrast, the Vermentino wines of Bolgheri in northern Tuscany are more highly regarded for their depth and complexity, and can be likened to Viognier for their floral, slightly soapy characteristics. Few Vermentino wines have the structure to reward cellaring, thus they are best consumed young.

Vermentino is produced in several California wineries including Tablas Creek in Paso Robles.