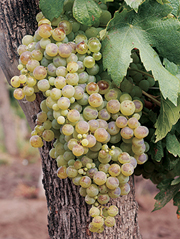 Torrontés is a white Argentine wine grape variety, producing fresh, aromatic wines with moderate acidity, smooth texture and mouthfeel as well as distinctive peach and apricot aromas on the nose. Three Torrontés varieties exist in Argentina: Torrontés Riojano, the most common, Torrontés Sanjuanino, and Torrontés Mendocino. It is primarily Torrontés Riojano that has received attention for the quality of its wines, and is the variety used for most Argentine wines simply labeled Torrontés.

The three grapes are relatively similar but do have some noticeable differences. Torrontés Riojano and Torrontés Sanjuanino both tend to have large loose bunches of pale grapes while Torrontés Mendocino, however, has smaller, tighter bunches of darker yellow grapes. Torrontés Riojano is the most aromatic of the three, with aromas reminiscent of Muscat and Gewürtztraminer wines. The least aromatic, and least widely planted, is Torrontés Mendocino with the aromatics and plantings of Torrontés Sanjuanino falling in between. All three Argentine Torrontés varieties belong to the Criollas group of grape varieties, which is a term used for presumably American-born cultivars of the European grapevine Vitis vinifera.

Wise Villa Winery produces a Torrontes that won a Silver Medal from the San Francisco Chronicle. It is described as playfully aromatic on the nose and lively on the finish. Pineapple, orange, melon, grapefruit, and citrus blossom nose with a complex balance of tropical fruit, grapefruit & melon on the finish.