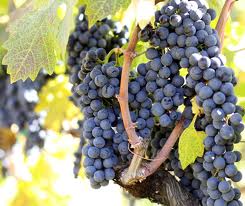 Zinfandel is a variety of red grape planted in over 10 percent of California vineyards. DNA fingerprinting revealed that it is genetically equivalent to the Croatian grape Crljenak Kaštelanski, and also the Primitivo variety traditionally grown in the “heel” of Italy, where it was introduced in the 18th century. The grape found its way to the United States in the mid-19th century, and became known by variations of the name “Zinfandel”, a name of uncertain origin.

The grapes typically produce a robust red wine, although a semi-sweet rosé (blush-style) wine called White Zinfandel has six times the sales of the red wine in the United States. The grape’s high sugar content can be fermented into levels of alcohol exceeding 15 percent.

The taste of the red wine depends on the ripeness of the grapes from which it is made. Red berry fruit flavors like raspberry predominate in wines from cooler areas, whereas blackberry, anise and pepper notes are more common in wines made in warmer areas and in wines made from the earlier-ripening Primitivo clone.