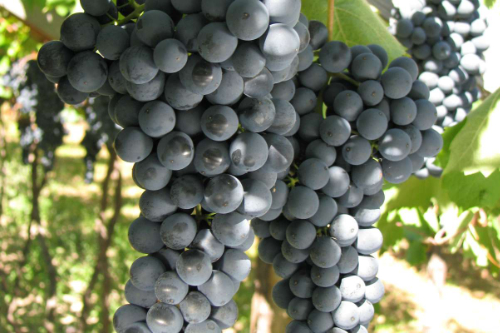 Teroldego is a red Italian grape variety grown primarily in the northeastern region of Trentino-Alto Adige/Südtirol, Italy. This variety produces deeply pigmented red wines with an intensely fruity character, a style that has become something of an icon for Trentino’s wine industry. It is soft and needs very little aging, usually being drunk within three years of bottling, though it can cellar well for up to 10 years. In blends, it adds color, and is planted in Tuscany, Sicily and the Veneto mainly for this purpose, though some experimental varietal wines are also bottled. There is also a small amount grown in Australia, California and Brazil.

Teroldego is an ancient grape variety, and has been cultivated in Italy for hundreds of years. Several theories abound about the variety’s name, including that it is derived from Tiroldola, another historic variety. It has also been suggested that the name is the Italian form of “golden Tyrol”, based on the status its wines achieved throughout Europe in the 18th and 19th centuries.

DNA testing has revealed that Teroldego is a parent of Lagrein, and a sibling of Dureza, a parent of Syrah. It is possibly also related to Pinot Noir.