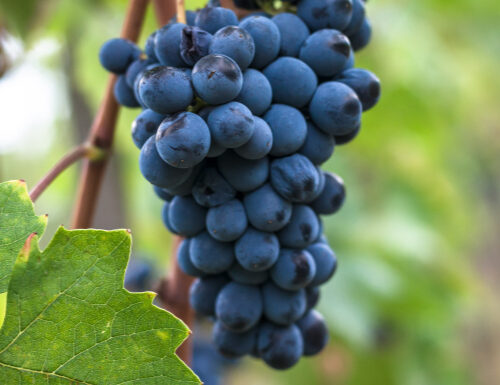 Sangiovese is a red Italian wine grape variety whose name derives from the Latin sanguis Jovis, “the blood of Jove”. Though it is the grape of most of central Italy from Romagna down to Lazio, Campania and Sicily, outside Italy it is most famous as the main component of the blend Chianti, Carmignano, Vino Nobile di Montepulciano and Morellino di Scansano, although it can also be used to make varietal wines such as Brunello di Montalcino, Rosso di Montalcino or Sangiovese di Romagna, as well as modern “Super Tuscan” wines like Tignanello.

Young Sangiovese has fresh fruity flavors of strawberry and a little spiciness, but it readily takes on oaky, even tarry, flavors when aged in barrels. Sangiovese was already well known by the 16th century. Recent DNA profiling by José Vouillamoz of the Istituto Agrario di San Michele all’Adige suggests that Sangiovese’s ancestors are Ciliegiolo and Calabrese Montenuovo. The former is well known as an ancient variety in Tuscany, the latter is an almost-extinct relic from the Calabria, the toe of Italy. At least fourteen Sangiovese clones exist, of which Brunello is one of the best regarded. An attempt to classify the clones into Sangiovese grosso (including Brunello) and Sangiovese piccolo families has gained little evidential support.