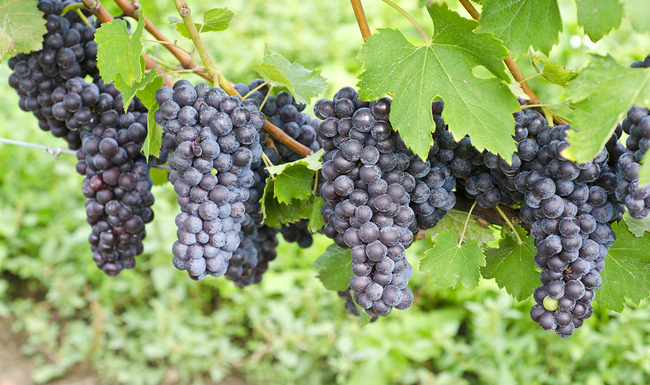 Nebbiolo (Italian), or Nebieul (Piedmontese) is a red wine grape variety predominantly associated with its native Piedmont region, where it makes the Denominazione di Origine Controllata e Garantita (DOCG) wines of Barolo, Barbaresco, Roero, Gattinara and Ghemme. Nebbiolo is thought to derive its name from the Italian word nebbia which means “fog.” During harvest, which generally takes place late in October, a deep, intense fog sets into the Langhe region where many Nebbiolo vineyards are located. Alternative explanations refers to the fog-like milky veil that forms over the berries as they reach maturity, or that perhaps the name is derived instead from the Italian word nobile, meaning noble. Nebbiolo produces lightly-colored red wines which can be highly tannic in youth with scents of tar and roses. As they age, the wines take on a characteristic brick-orange hue at the rim of the glass and mature to reveal other aromas and flavors such as violets, tar, wild herbs, cherries, raspberries, truffles, tobacco, and prunes. Nebbiolo wines can require years of aging to balance the tannins with other characteristics.

In the most notable expression of Nebbiolo, the wines of Barolo, there is division between what is considered a “traditional” approach to Nebbiolo and a “modernist” approach. The roots of both styles can trace their history to the early “pre-technology” production of Nebbiolo. Prior to the advent of temperature-controlled fermentation, the late harvest dates for Nebbiolo meant that the wines began fermentation when the weather turned cold. These cool temperatures would delay fermentation for several days, extending the maceration period and extraction of phenolic compounds such as tannins. When fermentation did begin, temperatures would reach excessive levels of 95-100 °F (35-38 °C), which would drastically reduce potential aromas and flavors. With the high levels of tannins, these early Barolos would require five years or more of aging in oak barrels to soften some of the astringency. Lack of understanding of proper hygiene lead to less sanitary conditions than what both traditional and modernist producers maintain today. Those conditions lead to the development of bacterial infection of cement fermentation tanks and old wood barrels, which contributed to the development of off flavors and potential wine faults that would require at least 24 hours decanting to alleviate.

Today’s winemaking for both traditionalists and modernists include strict hygiene controls and the use of some modern winemaking equipment. Rather than fall into one hardline camp or the other, many producers take a middle ground approach that utilizes some modernist techniques along with traditional winemaking. In general, the traditional approach to Nebbiolo involves long maceration periods of 20 to 30 days and the use of older large botti size barrels. The modern approach to Nebbiolo utilizes shorter maceration periods of 7 to 10 days and cooler fermentation temperatures between 82 and 86 °F (28 and 30 °C) that preserve fruit flavors and aromas. Towards the end of the fermentation period, the cellars are often heated to encourage the start of malolactic fermentation which softens some of Nebbiolo’s harsh acidity. Modern winemakers tend to favor smaller barrels of new oak that need only a couple years to soften the tannic grip of the wines. As new oak imparts notes of vanilla, it has the potential to cover up the characteristic rose notes of Nebbiolo.