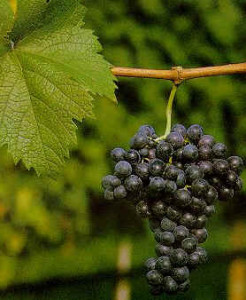 Canaiolo (also called Canaiolo nero or Uva Canina) is a red Italian wine grape grown through Central Italy but is most noted in Tuscany. Other regions with plantings of Canaiolo include Lazio, Marche and Sardegna. In Umbria a white berried mutation known as Canaiolo biancoexist. Together with Sangiovese and Colorino it is often used to create Chianti wine and is an important but secondary component of Vino Nobile di Montepulciano. In the history of Chianti it has been a key component blend and during the 18th century may have been the primarily grape used in higher percentage than Sangiovese. Part of its popularity may have been the grape’s ability to partially dry out without rotting for use in the governo method of prolonging fermentation. In the 19th century, the Chianti recipe of Bettino Ricasoli called for Canaiolo to play a supporting role to Sangiovese, adding fruitiness and softening tannins without detracting from the wine’s aromas. In the aftermath of the phylloxera epidemic, the Canaiolo vines did not take well to grafting onto new American rootstock and the grape began to steadily fall out of favor. As of 2006, total plantings of Canaiolo throughout Italy dropped to under 7,410 acres (3,000 hectares). Today there are renewed efforts by Tuscan winemakers to find better clonal selections and re-introduce the variety into popular usage.

Canaiolo was planted by Cougar Vineyard & Winery in Temecula in 2012.