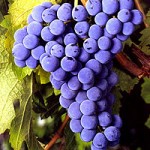 Cabernet Franc is one of the major red grape varieties worldwide. It is principally grown for blending with Cabernet Sauvignon and Merlot in the Bordeaux style, but can also be vinified alone, as in the Loire’s Chinon. In addition to being used in blends and produced as a varietal in Canada and the United States it is made into ice wine there.

Cabernet Franc is lighter than Cabernet Sauvignon, making a bright pale red wine and contributing finesse and a peppery perfume to blends with more robust grapes. Depending on growing region and style of wine, additional aromas can include tobacco, raspberry, and cassis, sometimes even violets.

Cabernet Franc is currently produced in over 200 California wineries, including Alexander & Wayne in Los Olivos, Byington in Los Gatos and Dubé in Jamul.