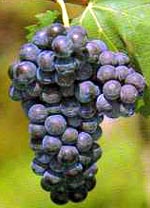 Aglianico is a black grape grown in the Basilicata and Campania regions of Italy. The vine originated in Greece and was brought to the south of Italy by Greek settlers. The name may be a corruption of Vitis hellenica, Latin for “Greek vine”. Another etymology derives the name Aglianico from a corruption of Apulianicum, the Latin adjective which indicates the whole of southern Italy in the Roman age. In early Roman times, it was the principal grape of the famous Falernian wine which was the Roman equivalent of a First Growth wine today.

Wines produced from Aglianico tend to be full-bodied with firm tannins and high acidity, endowing them with good aging potential. The rich flavors of the wine make it appropriate for pairing with rich meats such as lamb. In Campania, the grape is sometimes blended with Cabernet Sauvignon and Merlot in the production of some Indicazione Geografica Tipica (IGT) wines.

In its youth, Aglianico is very tannic and concentrated, requiring a few years of aging before it can be approachable. As it ages, the fruit becomes more pronounced and the tannins more balanced with the rest of the wine. The trademark coloring of the wine is a deep garnet. In well made examples of the wine, it can have chocolate and plum aromas.