Trefethen to Reopen Historic Winery on Eve of 50th Anniversary 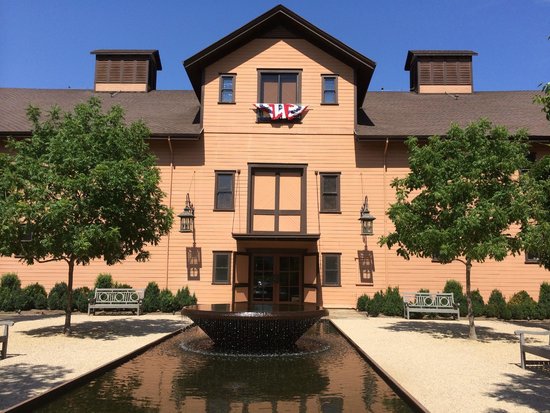 One of Napa’s pioneering families looks to the future after a two and a half year renovation.

(Napa, Calif.) April 4, 2017—Trefethen Family Vineyards, located in the heart of the Oak Knoll District of Napa Valley, is poised to uncork a new chapter in its rich history on May 6, 2017. On this first Saturday of May, Trefethen will reopen the doors of its iconic winery, now fully restored after severe damage from the devastating earthquake that rocked Napa in August 2014. This heralds the dawn of a new era for the family owned and operated estate. 2018 will mark Trefethen Family Vineyards’ 50th Anniversary, and winery founders John and Janet Trefethen are excited about the path ahead, including increasing roles for the brother and sister team of Lorenzo and Hailey Trefethen and viticulturist turned CEO, Jon Ruel.

Known for their estate grown Cabernet Sauvignon, Chardonnay, Merlot, and Riesling, Trefethen has been an influential presence in the Napa Valley for a half century. Now, with their winery restored to its former glory and an expansion of their curated wine tastings available to visitors, Trefethen Family Vineyards is ready for the next 50 years.

As one of Napa’s only surviving wooden wineries from the 19th century, Trefethen’s distinctive pumpkin-colored structure is truly one of a kind. Designed by the leading California winery architect of the 1800s, Hamden McIntyre, it was awarded a listing on the National Register of Historic Places in 1987. The Trefethen family has lovingly restored the building twice, once soon after they acquired it in 1968, and once more over the last two and a half years, following the strongest earthquake to hit the San Francisco Bay Area since that of Loma Prieta in 1989. Left barely standing after the 6.0-magnitude South Napa earthquake on August 24, 2014, post-quake images of Trefethen’s iconic building – the second and third stories leaning four feet to the west – embodied the destruction across Napa Valley in national media.

After the Trefethen family’s work to comprehensively restore the structure, it stands proudly once more, a symbol of the community’s resilience and recovery. The recent work includes a full seismic retrofit with new wood reinforcing the existing walls and a steel moment frame adding further strength. The look and feel of the building is still authentic 19th-century, maintaining the original floor plan and beautiful redwood siding throughout. The first floor is dedicated to the aging of Trefethen estate wines in barrel. The second floor features additional barrel storage and a new tasting area, with a stunning view of the estate vineyards. Under soaring ceilings, future visitors will savor this piece of Napa Valley’s history, as they taste stellar wines that have been made within the walls of this historic landmark.

As one of Napa’s founding families, the Trefethens helped shape Napa into what it is today. In 1968, when Eugene and Catherine Trefethen acquired the property, much of the valley was planted to fruit and nut orchards or dedicated to pasture for cattle. The development of Trefethen’s estate vineyards, led by Gene and Katie’s son, John, was remarkable – one of the first major plantings of grapes in the valley since Prohibition. When John and his new bride, Janet, began making wine, there were fewer than 30 wineries in the Napa Valley. As they built their own enterprise, Janet and John were also instrumental in the formation and development of some of the institutions that would go on to support Napa Valley’s growing success, including the Napa Valley Cooking Class, the Napa Valley Grapegrowers and the Napa Valley Vintners.

A true trailblazer, Janet Trefethen traveled tirelessly, a woman selling premium wine from a small part of Northern California when the wine industry was mostly male and fine wine almost exclusively French. For more than ten years after Trefethen’s inaugural release, Janet personally visited every restaurant and wine shop interested in purchasing Trefethen wines, meeting the owners before determining if she would sell wine to them. Back at the vineyard, John focused on the grapes and the wines. His efforts were soon rewarded in the biggest way imaginable when, in 1979, the French declared the 1976 Trefethen Chardonnay “The Best Chardonnay in the World” at the Gault Millau Wine Olympics in Paris. Along with the famous Judgment of Paris, these results catapulted Napa Valley onto the world stage.

On the eve of the winery’s 50th anniversary, John and Janet have begun sharing leadership responsibilities with the next generation, their children, Hailey and Lorenzo Trefethen. Under the mentorship of CEO, Jon Ruel, the two siblings complement each other in their interests and personalities, with Hailey focused on the craft from vine to bottle, and Lorenzo dedicated to bringing the bottle to the table. Most recently, Hailey managed the comprehensive restoration of the historic winery and Lorenzo has been busy expanding the market for Trefethen wines to include a new generation of wine consumers, both within the U.S. and abroad. Jon Ruel, with a background in research ecology and viticulture, has been at Trefethen for thirteen years. His path from viticulturist to CEO is rare in the wine industry but very fitting for Trefethen, a winery that is truly rooted in the family’s estate vineyards.

Indeed, Trefethen Family Vineyards remains admirably and unusually committed to the craft of estate-produced wines, using only grapes that they grow themselves. This focus, combined with increasingly precise farming techniques, has led to a renaissance in their winemaking and their red wines in particular. The current release of Trefethen Cabernet Sauvignon, from the stellar 2014 vintage, highlights their approach: intense fruit on the nose complemented with a classic brightness and elegance on the palate. Dragon’s Tooth, a truly innovative blend inspired by Trefethen’s first plantings of Petit Verdot and Malbec, is taking the red blend category by storm and H?Lo, Trefethen’s flagship Cabernet, has twice been declared “Red Wine of the Year” by Connoisseur’s Guide to California Wine.

Visiting Trefethen offers a singular experience and a glimpse into one of the foundations of the Napa Valley. The winery offers Classic ($25 per person) and Reserve ($40 per person) tastings, conducted by professional wine educators, seven days a week from 10am-4:30pm. A two-hour Vineyard and Historic Winery Tour ($45 per person) immerses visitors in the history of the Trefethen property and the family’s approach to crafting world-class estate grown wines. The tour concludes with a special tasting and is available Monday-Friday at 10:30am. Advance reservations for the Tastings and the Tour are recommended and are available online at www.trefethen.com and by calling 866-895-7696.

On Saturday, May 6th the Trefethen family will warmly welcome both old friends and new with a grand re-opening celebration to include delightful entertainment, magnificent food, and of course, the signature wines that have made the winery famous for nearly 50 years. Tickets ($95 per guest for general public and $75 per guest for Wine Club Members) are available online at www.cellarpass.com/trefethen.

Trefethen Family Vineyards is one of Napa’s pioneering wineries. Founded in 1968, John and Janet Trefethen helped define what the Napa Valley is today. Nearly five decades later, this Napa legend is still family owned and now includes the third generation, who remain committed to the craft of 100% estate grown wines. The winery is located at 1160 Oak Knoll Ave. Tastings are available daily. For more information, please contact the winery at 866.895.7696 or visit www.trefethen.com.