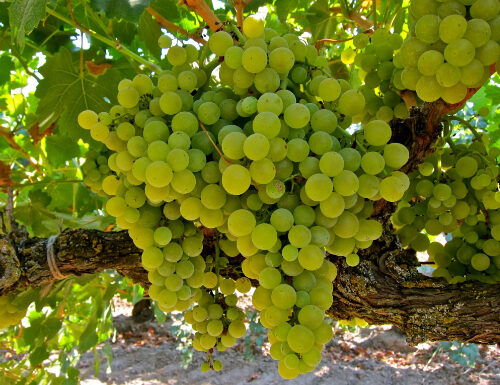 Symphony is a Californian crossing of Muscat of Alexandria and Grenache Gris developed in 1948 (but not commercially released until 1982) by the late Harold Olmo, professor of viticulture at the University of California, Davis. As its pedigree suggests, it is an aromatic variety with slightly spicy flavors.

Symphony is mostly used in white-wine blends, where it contributes to the aromatic profile of the final product. A few varietal examples of Symphony are made in California, typically produced as off-dry or late-harvest wines.

The variety was originally intended as a grape suitable for the hot Central Valley but there, and elsewhere in California, growers enjoyed only limited success with it. It is now cultivated mainly in the inland Lodi and Sierra Foothills regions.

Symphony is currently produced at several wineries in California including Ironstone Vineyards in Murphys and Michael David Winery in Lodi.