Sideways turning 15, and the Santa Ynez Valley is celebrating 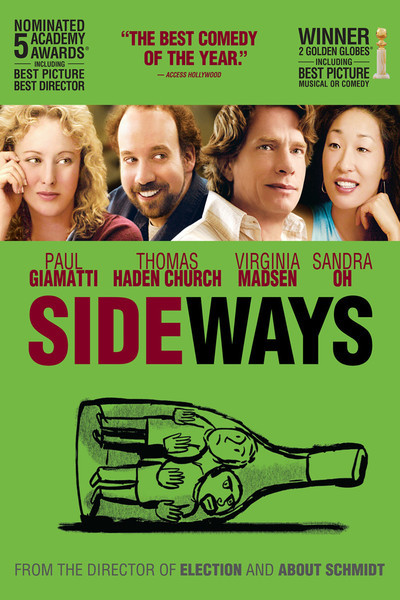 Scheduled for October, Sideways Fest will celebrate the 2004 Oscar-winning cult classic that helped put the Santa Ynez Valley on the wine map

Santa Ynez, CA – Pinot Noir…Merlot…and a bachelor weekend in the Santa Ynez Valley. Among wine lovers, the movie Sideways is almost instantly recognizable — and often quoted — even 15 years after it was first released.

Filmed almost entirely on location, Sideways helped put the Santa Ynez Valley wine country on the map when the cult classic first hit theaters on Oct. 22, 2004. And the adventures of Miles (Paul Giamatti), Jack (Thomas Haden Church), Maya (Virginia Madsen), and Stephanie (Sandra Oh), have had an outsized influence on a generation of wine lovers, the wine industry in general, and the Santa Ynez Valley specifically.

“Sideways resonates in the Santa Ynez Valley as much today as it did when it was first watched by audiences all over the world,” said Shelby Sim, CEO of Visit the Santa Ynez Valley. “Reminders are all around the region. The hotels, wineries, and restaurants that were seen in the film are still frequented by lovers of Sideways, and tours based on the film’s locations are still popular.”

The Santa Ynez Valley is celebrating the 15-year anniversary of the film’s release with Sideways Fest, scheduled for Oct. 18-20. Part of the Taste of the Santa Ynez Valley festival, Oct. 17-20 — an inaugural four-day food, wine and experiential event set in and around the towns of Ballard, Buellton, Los Alamos, Los Olivos, Solvang, and Santa Ynez — Sideways Fest will include a screening and a Sideways tour, in addition to the main wine and food festival.

Of course, some things in the Santa Ynez Valley have changed in the 15 years since the movie’s release. The valley has grown into an internationally renowned wine region, while still managing to keep many of its hidden gem charms in the process. Visitors can still spend the night in the motel in Buellton where Jack and Miles stayed throughout the movie, but it was recently renamed to the Sideways Inn and completely renovated.

Much remains the same, too. While the Santa Ynez Valley produces many great varietals, it is still best known for the distinctive and luxurious Pinot Noir that Miles so craved. And many of the film’s locations — AJ Spurs, Alma Rosa Winery, Andrew Murray Vineyards, Fess Parker Winery, Firestone Vineyard, Foxen Vineyard & Winery, Gaviota State Park, Hitching Post II, Kalyra Winery, Los Olivos Cafe & Wine Merchant, Ostrichland USA, River Course at The Alisal, and Solvang Restaurant — are frequented by lovers of Sideways still today.
“To this day, it is not at all uncommon to overhear visitors at a restaurant, winery, or just walking down the street, repeating a famous line from the movie, or to strike up a conversation in a local tasting room about the movie’s influence on pop culture in general and particularly the Santa Ynez Valley,” said Sim.

For those who can’t attend Sideways Fest, fans of the movie can celebrate Sideways’ 15th anniversary by walking in the slightly inebriated footsteps of Miles and Jack. Numerous tour companies offer guided tours to the various film locations throughout the valley, while maps and information are available to those seeking a self-guided trip.

For more information or to begin planning a Sideways-themed trip to the Santa Ynez Valley, visit visitsyv.com.

About the Santa Ynez Valley

Barely two hours from Los Angeles and a scenic four-hour drive from San Francisco, the Santa Ynez Valley feels worlds apart from both. With six distinct communities encompassing everything from classic California wine country to Northern European traditions to the very best of the Old West, the Santa Ynez Valley is home to endless possibilities. Here in and around the towns of Ballard, Buellton, Los Alamos, Los Olivos, Santa Ynez and Solvang visitors will find more than 100 wineries, incredible food, special events and a unique, rich heritage. For more information, including a complete listing of wedding venues, restaurants, wineries, tasting rooms and events, go to VisitSYV.com.