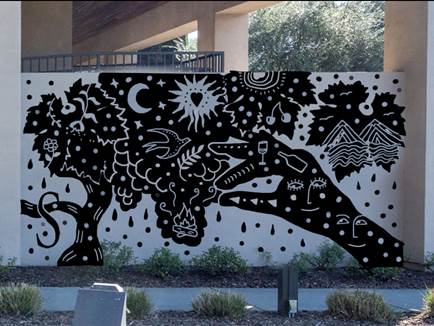 Healdsburg, CA – Seghesio Family Vineyards is pleased to announce that accomplished artist Angie Mattson is the winner of the 125th Anniversary Mural Contest. Mattson’s design, Night in Zinfandel, triumphed over hundreds of entries submitted by artists across the U.S. and will execute her unique mural at the historic Seghesio Family Vineyards Tasting Room in Healdsburg, CA. Artists of all backgrounds were invited to submit designs for the mural, which will be experienced by the more than 15,000 annual visitors to the property and beyond each time it is shared on social media. The winery launched the contest in April 2020 to source a design for the commemorative mural and had outstanding engagement, reaching nearly one million consumers across social media channels and generating more than 4,000 votes that influenced the finalists and grand prize winner.

“We were humbled by the outpouring of interest by talented artists across the country who desired to participate in our 125th anniversary celebration with a mural design inspired by Seghesio’s incredible wines and story,” said Stephanie Wycoff, estate director of Seghesio Family Vineyards. “There were many stunning designs, but Angie Mattson’s submission was visually striking and captured the essence of our charm and history with many thoughtful details.”

Angie Mattson (who also goes by her artist moniker Uto X) is based in Grand Rapids, MI and has been honing her minimalist folk art style for the past several years.  She began by designing merchandise for her band In The Valley Below. Her artwork is inspired by her life on the road and the satisfaction of finding bold lines in nature and art. Splitting her creative time between music and visual art brings a fresh perspective and meaningful layer to each.

Mattson’s design is a monochromatic illustration of grape picking with symbols interwoven throughout that reflect the people, places and values that have made Seghesio Family Vineyards who they are today and that will continue to guide the winery into the next 125 years.

“Since Seghesio is so well-known for Zinfandel, I did a lot of research to get the shape of the leaves and the grapes just right,” said Mattson. “I also did a lot of research into the flavors of Zinfandel and tried to incorporate those elements into the design. I love the idea that wine is influenced by the land it comes from – the mountains and the sea, the wild herbs, flowers, and plants that grow in and around a vineyard. I wanted to capture the way it feels when you’re in a vineyard and especially at night under the stars when it’s very peaceful but there is still a lot happening – that’s when the animals are coming out and there is some mischief.”

Seghesio Family Vineyards’ deep roots in Sonoma County, its role as a leading Zinfandel producer and steward of some of the oldest vineyards in North America, the importance of family, and a commitment to sustainable practices have been the consistent, foundational principles of the winery over the last 125 years.  The winery maintains several blocks of old vine Zinfandel across its estate vineyards, including the original vines that the founders planted in 1895 at Home Ranch in Alexander Valley.  Seghesio Family Vineyards encompasses more than 300 acres of estate-owned vineyards in premier sites across Sonoma County, including in Alexander, Dry Creek, and Russian River valleys.

Submissions for the Seghesio Family Vineyards 125th Anniversary Mural were accepted and displayed on the contest website. Visitors to the website were encouraged to comment on their favorite designs, with each comment counting as a vote.  The votes were considered when choosing the finalists along with input from a panel assembled by Seghesio Family Vineyards. Finalists included acclaimed international artists such as Amanda Lynn for her design, “Taste of Life,” Monica Tiulescu for her design, “Zen of Zin,” ELLE for her submission “Vineyards Poetry,” and Kimberly Yaeger for her unnamed design. All works can be viewed on the contest website.

The winning design is scheduled to be unveiled in the fall of 2020 in celebration of the winery’s 125th anniversary.

At Seghesio Family Vineyards, the key word is family. Our story begins in 1895 when our founders planted Zinfandel vines deep in Sonoma County soil and set down roots that, five generations and 125 vintages later, are still growing strong. Today, Seghesio Family Vineyards encompasses over 300 acres in preeminent Sonoma growing regions including the Alexander, Dry Creek and Russian River Valleys.

Seghesio Family Vineyards is one of Sonoma County’s landmark houses for Zinfandel, and Winemaker Andy Robinson showcases his experience with and respect for the grape in each bottle produced. Robinson works closely with the vineyard team, led by Viticultural Director Ned Neumiller who represents the Seghesio family’s fifth-generation of winegrowers, and balances generations of experience with the most advanced modern viticultural practices, ensuring the highest quality grapes with each vintage. Seghesio’s celebrated, food-friendly wines have a timeless sensibility and are made with elegance, balance, and purity that are crafted to carve out more moments for wine lovers to slow down, breathe, and savor life, family-style.