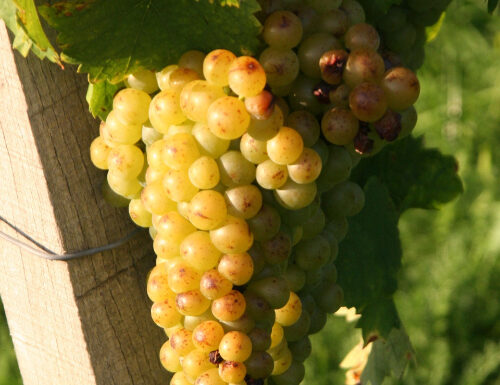 Muscat Blanc à Petits Grains is a white wine grape of Greek origin that is a member of the Muscat family of Vitis vinifera. Its name comes from its characteristic small berry size and tight clusters. It is known under a variety of local names such as Moscato bianco, Muscat blanc, Muscat Canelli, Muscat de Frontignan, Muscat de Lunel, Muscat d’Alsace, Muskateller, Moscatel de Grano Menudo, Moscatel rosé and  Sárgamuskotály .

While technically a white grape, there are strains of Muscat Blanc à Petits Grains vines that produce berries that are pink or reddish brown. The same vine could potentially produce berries of one color one year and a different color the next. These strains are more prevalent in Australia, where the grape is also known as Frontignac and Brown Muscat. South Africa’s Muskadel strain tends to show the same darker characteristics. Variants where the differing grape colour is stable are typically classified as separate grape varieties Muscat Rouge à Petit Grains for red skin colour and Muscat Rose à Petit Grains for pink skin colour.

In Italy, the grape is the most widely planted member of the Muscat family and is most commonly known as Moscato Bianco. It is the oldest known variety grown in Piedmont and is the primary component of the Asti and  Moscato d’Asti wines, as well as for the aromatized and fortified vermouths. It is also commonly used for fortified dessert wines as well as the semi-sparkling Frizzante.

In Greece the muscat grape is mainly cultivated in the island of Samos, at the eastern part of the Aegean where it covers about 97% of Samos’ vineyards. Samian sweet dessert wines are known worldwide. They motivated Lord Byron to write in a poem, “Fill high the bowl with Samian wine.” France is the main country where Muscat of Samos is exported, especially in order to be used as a blending grape for wines. Samos union of vinicultural cooperatives controls the greatest part of the production of the Muscat de Samos, also known sometimes in Greece as “moschoudi”.

In France, the grape is used as a blending grape with Grenache blanc  and Muscat of Alexandria in vins doux naturels wines from the  Frontignan area such as Banyuls, Côtes d’Agly, Grand Roussillon,  Rivesaltes and St-Jean de Minervois. It is the primary grape in the Rhône  wine Muscat de Beaumes-de-Venise and a blending grape with Clairette blanc in the recherché sparkling wine Clairette de Die (brand label  Tradition). In Alsace, it is known for the highly aromatic and dry wines that it produce. In the Hérault region it is the primary grape for Muscat de Mireval.