Markham Vineyards is the Proud Wine Partner of the Award-Winning Film, A Fine Line 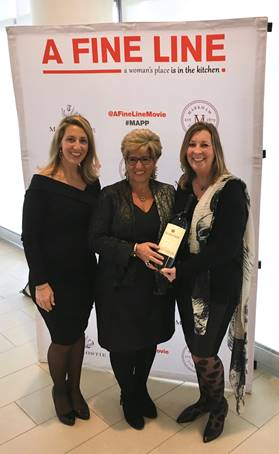 Markham Vineyards is excited to announce that it will serve as the proud wine partner of the award-winning documentary, A Fine Line, during its 2020 screening tour, and national television broadcast premiere on PBS in March, which will coincide with Women’s History Month. Directed by Filmmaker Joanna James, A Fine Line chronicles the challenges faced by female chefs in the male-dominated culinary industry. Drawing attention to these issues through her powerful film, James follows each screening with inspiring conversations that feature leading women chefs, restaurateurs, winemakers, farmers and activists – including Markham Winemaker Kimberlee Nicholls.

“A Fine Line is an important film that grapples with themes at the heart of our national conversations right now, including workplace harassment, equal pay, paid parental leave, and gender equity in relation to career advancement,” said Nicholls. “As a company that is committed to equality and social equity, we are honored to help bring awareness to these issues.”

A Fine Line will have its official New York City premiere on Friday, February 28th at Cinema Village. In addition to James, star chefs from the film, including Amanda Freitag, Dominique Crenn, Sara Moulton, Sylvia Weinstock, Angela Raynor and Valerie James, will be in attendance. The evening will also celebrate special honoree Chef Victoria Blamey, of Gotham Bar and Grill, at an exclusive after-party at TAO Downtown. A Fine Line will screen in New York for a full week, and will be open to the general public from February 29th to March 5th. Special screenings will be held on Saturday, February 29th and Sunday, March 1st, with the latter including a post-screening Q&A that will highlight the perspectives of food journalists and media makers, featuring Vitus Spehar, director of impact: Womxn & LGBTQIA+ Programs at The James Beard Foundation, in conversation with Dana Cowin, former editor-in-chief of Food & Wine, and special honoree Angie Mar, chef and owner of The Beatrice Inn.

Other upcoming showings include March 4th at the U.S. Capitol in Washington, D.C., which will engage elected officials and policy leaders on Capitol Hill around paid family leave expansion with the National Partnership on Women and Families.

“We are grateful to have a likeminded partner in Markham Vineyards to help us champion women’s empowerment and gender equality across all industries. With their support, we are able to continue to have this important conversation that is resonating with so many people across the country,” said James.

Markham is the proud custodian of 311 planted acres of pristine, certified sustainable vineyards in the Napa Valley. Founded in 1977 by industry pioneer Bruce Markham, Markham launched its first vintage of Napa Valley Merlot in 1980, becoming only the fourth winery in Napa Valley to make the varietal Merlot. Today, Markham continues to be recognized for making benchmark Napa Valley Merlots, as well as Cabernet Sauvignon, Bordeaux blends, Sauvignon Blanc and Chardonnay. Longtime Winemaker Kimberlee Nicholls, who joined the Markham family in 1993, has consistently styled and crafted true-to-varietal wines using grapes from our estate vineyards in Yountville, Oak Knoll and Calistoga. Markham’s wines have earned acclaim for their vineyard-inspired complexity and character, proudly holding the Napa Green Land, Napa Green Winery, and Fish Friendly Farming certifications. Napa Valley is our home and we proudly support our community in caring for both people and place.