Josh Cellars Puts the ‘Thanks’ Back in Thanksgiving with Joshgiving Movement 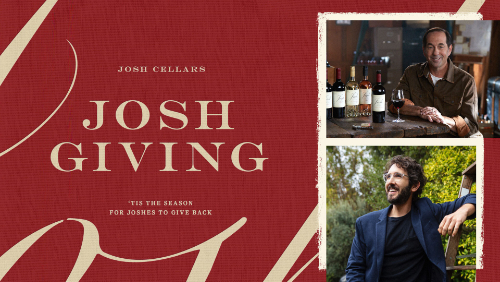 Stamford, Conn. – This Thanksgiving season, the #1 premium table wine in America, Josh Cellars, is rallying people named Josh for Joshgiving – an initiative aimed at inspiring friends, families and communities across the nation to show their gratitude for one another. Throughout the months of October and November, the brand, led by founder Joseph Carr, is enlisting Joshes across the country, including renowned singer Josh Groban, to give back to the people and communities that enrich their lives by conducting meaningful acts of thanks in the lead up to the Thanksgiving holiday.

A brand rooted in gratitude, Josh Cellars was created by Joseph Carr as a tribute to his dad, Josh Carr. To honor his father’s legacy of lifelong service and volunteerism, Josh Cellars consistently supports causes and communities that were important to Josh. To date, Josh Cellars has donated over $1 million to various charities and organizations through direct donations and annual charitable bottlings. This year’s Joshgiving volunteer activities and donations are a natural extension of Josh Cellars’ commitment to giving back and showing gratitude for one’s local community. Joseph Carrand Josh Cellars are providing an opportunity for others to join in and give thanks in their own way.

“My dad embodied the spirit of Thanksgiving every day of the year. He believed fervently in the power of people banding together for a good cause,” said founder Joseph Carr. “It will be inspiring to witness all of these acts of thanks come to life through Joshgiving. We hope this movement inspires a groundswell of goodwill this holiday season and beyond. I know my dad would be proud.”

To help spread the word about Joshgiving, Josh Cellars and Joseph Carr are teaming up with a well-known Josh, global superstar and singer, actor and philanthropist Josh Groban. For his act of thanks, Josh Groban will be partnering with Josh Cellars to donate $100,000 to Sing for Hope, a nonprofit that harnesses the power of the arts to create a better world. The organization brings artists in creative service together to impart hope, healing, and connection to community spaces through music. As part of his Joshgiving activation, Groban will also be working with Sing for Hope to customize a piano, uniquely designed by Laishan Ito, to be donated to a community in need. Each Sing for Hope Piano is a representation of the organization’s mission to uplift lives and bring joy to people through the arts.

“I’m excited to collaborate with Josh Cellars for Joshgiving,” said Josh Groban. “I believe strongly in the ability of music to uplift and bring joy to all people everywhere and I’m grateful to be able to give back this Thanksgiving in partnership with Sing for Hope, Josh Cellars and fellow Joshes across the country.”

Along with Josh Groban, Joseph Carr and other Joshes across the country will also be supporting various causes and organizations that are meaningful to them. In honor of his dad, a proud army veteran, Joseph Carr will be working with American Humane’s Pups4Patriots ™ program which trains dogs in need of a forever home to be lifesaving service dogs for veterans in need. Similarly, the other Joshes enlisted to spread Joshgiving are conducting various acts of thanks that impact and benefit their local communities. From hosting community coat drives, to fundraising for a local bookstore, to helping feed those in need via food banks, the Joshgving program strives to put the “thanks” back in Thanksgiving, one Josh at a time.

Feeling inspired? Josh Cellars is calling on Joshes and non-Joshes alike nationwide to join in on Joshgiving. Post your own act of thanks on Instagram using #Joshgiving, or tag your favorite charity in the comments of any Joshgiving post on @joshcellars Instagram. Josh Cellars will choose three fan-submitted charities to receive a donation from Josh Cellars leading up to Thanksgiving. Additionally, throughout the month of November, Josh Cellars has pledged to donate $1 for every bottle purchased on JoshCellars.com (up to $25,000) to American Humane’s Pups 4 Patriots program.

To learn more about Joshgiving, our team of Joshes and how you can join in, please visit www.joshcellars.com/Joshgiving.

Initially called W.J. Deutsch & Sons Ltd., the company was founded in 1981 by Chairman Bill Deutsch to market quality wines produced by prestigious families from major wine regions of the world. In 2009, it announced the expansion of the award-winning company to include a spirits portfolio. Today the company is renowned for its brand-building prowess and its ability to meet the needs of the modern consumer. Bill’s son Peter Deutsch is CEO; thus, two generations of the Deutsch family work side by side in their continuous quest to build strong brands and relationships throughout the wine and spirits industry.

Tony®, EMMY®, and four-time GRAMMY® Award-nominated singer, songwriter, actor, and philanthropist Josh Grobanpossesses one of the most outstanding and instantly recognizable voices in music. Moreover, he continues to captivate fans everywhere as both a powerhouse vocalist and dynamic renaissance man. He has sold over 35 million albums worldwide, headlined legendary venues on multiple continents, and entertained audiences with acclaimed film and television appearances. His catalog spans a series of chart-topping blockbuster albums, including Josh Groban (5x-platinum), Closer (6x-platinum), Noël (6x-platinum), Awake (2x-platinum), Illuminations, All That Echoes (gold), Stages(gold), his first UK #1 album, Bridges, and his most recent release, Harmony. Along the way, he has packed arenas throughout North America, Europe, Australia, South Africa, New Zealand, and Asia.

Extending his repertoire, Groban made his Broadway debut in 2016 with a starring role in Natasha, Pierre & The Great Comet of 1812. He garnered a Tony® Award nomination for Best Lead Actor In A Musical. He has expanded his presence with appearances on Glee, The Simpsons, The Office, CSI: NY, It’s Always Sunny in Philadelphia, and The Crazy Ones as well as in the feature films Coffee Town, Muppets Most Wanted, and Crazy, Stupid, Love. In addition, he starred in the NETFLIX series The Good Cop in 2018. Groban maintains his position as the consummate American showman in 2022 and beyond. This year, he returned to the hallowed stage of Radio City Music Hall for his Great Big Radio City Show residency and launched a nation-wide live tour. This winter, Groban will star in ABC’s new special Beauty and the Beast: A 30th Celebration as none other than the Beast and in the spring of 2023 he will once again grace the stages of Broadway in the revival of Sweeney Todd, playing the title role. He remains an active arts education philanthropist and advocate, and his Find Your Light Foundation helps enrich the lives of young people through arts, education, and cultural awareness.

About Sing for Hope

Sing for Hope harnesses the power of the arts to create a better world. Our creative programs bring hope, healing, and connection to millions of people in hospitals, schools, refugee camps, transit hubs, independent living centers, and community spaces worldwide. Founded in New York City in 2006, Sing for Hope partners with hundreds of community-based organizations, mobilizes thousands of artists in creative service, and produces artist-created Sing for Hope Pianos across the US and around the world. The official Cultural Partner of the World Summit of Nobel Peace Laureates, Sing for Hope champions art for all because we believe the arts have an unmatched capacity to uplift, unite, and heal. Learn more and join the movement at https://www.singforhope.org/.