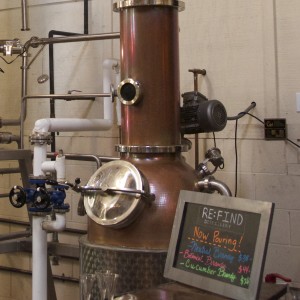 Sipping world class reds and whites in the golden hills of California is just about anyone’s idea of heaven. But when temperatures sore into triple digits I begin to crave the tinkling of ice in a cocktail glass.

My friends and I were up in Paso Robles hitting the wine trails and decided to check out a distillery we’d heard about. We’d had a wonderful, late-morning, wine and food pairing  at Opolo, sampled some fine Rhone blends at Tablas Creek, and tasted with conviction at Brecon. But after four days in wine country, we hankered after something a little harder. So we headed east on Adelaida Road to Re:Find which is in the Villacana Winery. Alex Villacana was pouring behind the counter and told us the whole story. Who knew you could make gin and vodka out of discarded grape juice?

The distillery is next to the tasting room. The stills would look at home on the  Nautilus, the submarine from Disney’s “20,000 Thousand Leagues Under the Sea“, sort of an arrangement of  potbelly stoves and  cyberpunk  bassoons.  All that brass and copper is down right beautiful.  And all to take what was once a waste product and turn it into gin and vodka.

Well, you can’t call it gin or vodka if they’re sold directly, it’s the law, but these botanical liquids cry out for craft-made tonic.  Matt, the mixologist of the group, decided to make Moscow mules, and taking a suggestion from Alex, added cilantro to the standard recipe. It was delicious and very eco-friendly. Let’s just say it was very green, and so healthy I had two.