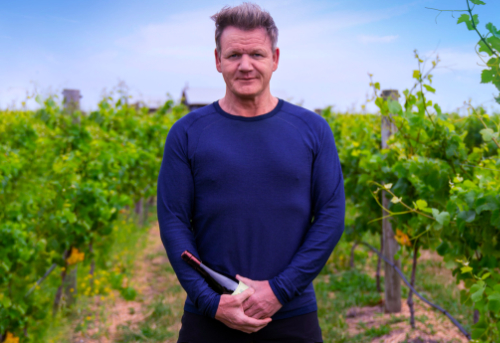 Monterey, CA – Award-Winning Chef and Restaurateur Gordon Ramsay announces a new namesake wine brand—Gordon Ramsay Wines—in collaboration with Winemaker and Master Sommelier Christopher Miller of Seabold Cellars in Monterey, California. The portfolio will be made available for purchase on Monday, March 1, 2021 at https://www.gordonramsay.wine, ranging in price from $20 – $60 per bottle, with eight Californian wines including Sauvignon Blanc, Chardonnay, Rosé, and Pinot Noir from Monterey, a Reserve Chardonnay from Sonoma County, and three Cabernet Sauvignons, one of which is a Reserve from Napa Valley.

“Passionate winemakers in California’s cooler climate regions are producing delicious, balanced wines, and my time in California has convinced me that Californian wines stand with the best in the world. Christopher Miller is a master of his craft, so working with him has been amazing. Wine is a complex marriage of art, science, and tradition all captured together in a glass, and I am very excited to join in that tradition with Gordon Ramsay Californian wines. Until now the wine has been served exclusively at my restaurants in Las Vegas and Tahoe, so I’m very excited it’s now available to anyone to enjoy with a delicious meal or on its own with friends and family.”

For Gordon Ramsay’s wines, all of the grapes are sourced from sustainable and organically-practicing vineyards in marginal climates to produce balanced wines that complement cuisine. The winery practices minimal intervention, involving only natural fermentation yeasts: no water, acid, or other common winemaking adjustments; restrained use of oak; and responsibly minimal sulfur usage.

“Much like in the kitchen, we believe the best wines begin with sourcing the best ingredients and doing as little as possible to coax the grapes’ natural potential,” said Miller.

Prior to founding Seabold Cellars, Chris spent most of his career in fine dining restaurants. A New Orleans native, he worked his way through college learning about food and wine at Emeril’s and the Brennan family’s restaurants. The day after graduation, he moved across the country to study wine at Seattle’s legendary Canlis Restaurant. There, he met Greg Harrington, MS, who had just founded Gramercy Cellars in Walla Walla. Inspired by Greg’s passion, Chris spent all his free time working in Walla Walla, making his first wine in 2006. In 2008, Chris took the position of wine director for Wolfgang Puck’s flagship restaurant, Spago Beverly Hills, quickly developing the program into a Wine Spectator Grand Award winner. During that time, he worked towards his Master Sommelier diploma while regularly hosting many of the country’s largest wine collectors’ tastings. Chris spent harvests – and the few days he had off – in Sta. Rita Hills, working and studying under Greg Brewer at Brewer-Clifton and Melville. After 20 years in restaurants, he finally made the full-time switch, trading in his suit and tie for jeans and boots.

Miller has produced a few hundred cases of each Gordon Ramsay Wine, totaling about 2,000 cases. The wines are available for purchase via the website, www.gordonramsay.wine, as well as Gordon Ramsay’s US restaurants.

Founded in 1997, Gordon Ramsay Restaurants comprises the restaurant business of acclaimed chef, restaurateur, TV personality and author Gordon Ramsay. It is one of the largest privatelyowned restaurant groups in the UK and has 17 restaurants in London.

The group has a further 17 restaurants internationally including USA, France, Dubai and Singapore with further international openings planned.

To date, Gordon Ramsay holds a total of 7 Michelin stars across the restaurant group worldwide, including the flagship venue Restaurant Gordon Ramsay, which has held three Michelin-stars for more than 18 years. As well as fine dining, the group has expanded to include more casual dining restaurants offering a wide variety of guest experiences around the globe such as Bread Street Kitchen, Gordon Ramsay Pub & Grill, Gordon Ramsay Steak and Gordon Ramsay Hell’s Kitchen.

Located in Marina, California, Seabold Cellars was established in 2014 by Christopher Miller on the belief that cool-climate vineyards produce balanced wines that showcase their origin more than their winemaking. Today, Seabold Cellars produces small-lot, site-specific Burgundy and Rhône varieties, as seen through a California lens. For more information, visit https://www.gordonramsay.wines and Seabold Cellars.