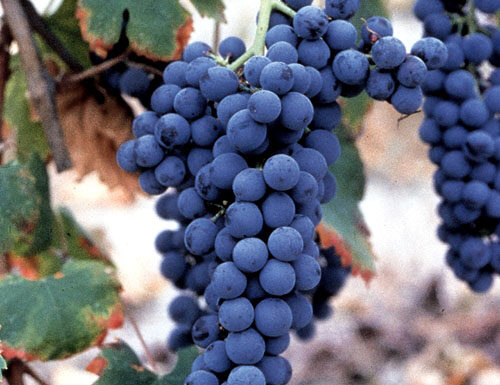 Freisa is a red Italian wine grape variety grown in the Piedmont region of north-west Italy, primarily in Monferrato and in the Langhe, but also further north in the provinces of Turin and Biella. Freisa is a vigorous and productive vine whose round, blue-black grapes are harvested in early October. The three-lobed leaves are relatively small and the bunches are elongated in form. By the 1880s it had become one of the major Piedmontese grapes, and in that period its cultivation was stimulated by the vine’s resistance to the downy mildew caused by the Plasmopara viticola fungus. Wines made from the Freisa grape are red and usually somewhat sweet and lightly sparkling, or foaming. Still and fully sparkling versions are also produced, however, as are dry and more decidedly sweet styles. In the Canavese there is also a rosé which can be made primarily from Freisa according to Denominazione di origine controllata (DOC) regulations.