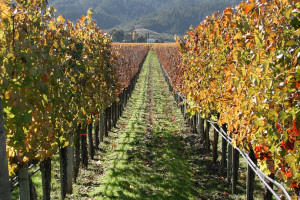 Climate change is having an effect on Napa Valley wine production. The government has said climate change has caused more droughts and longer droughts. The federal government predicts that temperatures in the wine growing region of the Napa Valley will increase by nearly 4 degrees during the next 40 years. Some scientists in turn believe that would mean that the land amount in Napa Valley that would remain suitable to grow the grapes needed for world-renowned wine would be cut in half.

However, other scientists say a number of variables that could possibly lessen the climate change impact on the wine industry in Napa are possible, including technological advances that would allow the wine makers in the region to adapt to warmer temperatures.

Amid calls for a moratorium on new vineyards and wineries in Napa County because of concerns about visitor traffic and water shortages, county government’s top decision-makers on such projects directed staff to give them a clearer view on the situation by this fall and develop solutions for streamlining the environmental-review process and informing more neighbors about project proposals.