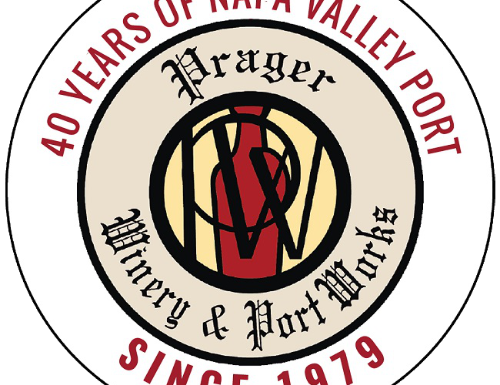 Prager Winery and Port Works was founded in 1979 by Jim and Imogene Prager. The Prager’s moved to St. Helena from Orange County in Southern California, where Jim had been a commercial casualty insurance broker. After vacationing in Napa in 1974, he started dreaming of being a winemaker in the Napa Valley, and in 1977 decided it was time to follow his dream. He loved port, and believed that world class ports could be produced in the Napa Valley.  Moving to Saint Helena with his wife Imogene, and his 7 children, Jim established Prager Winery and Port Works. The first crush was in the historic carriage house on the property, built in 1865 and once part of the historic John Thomann Winery and Distillery estate. The first releases were a Cabernet Sauvignon, a Chardonnay, and the first port, the original Noble Companion Port. Total production was only 120 cases. Over the years, production has increased to almost 4000 cases. As the production increased, so did the roll of the second generation, and now all day to day activities are managed and run by Jim and Imogene’s three sons, Jeff, Peter, and John, as well two of the daughters, Mary and Katie. They are joined by two son in laws, Richard Lenney and Kevin Rooney.
Today, Prager has become a destination for lovers of world class fortified wines. Visitors can experience a full lineup of ports, ranging from Vintage style to Aged Tawny’s, and much more unusual white ports. In addition to award winning ports, Prager produces juicy and refreshing late harvest Riesling, and a sought after Petite Sirah. While the names of the Vintage and tawny ports, Royal Escort and Noble Companion speak to the regal nature of these products, some of the other names are much closer to the heart. The white ports Aria and Alyssa as well as the Late Harvest Rieslings, Sweet Claire and Madeline are named after 4 of Jim and Imogene’s 22 grandchildren.
At Prager Winery and Port Works, you can be sure of friendly service along with top quality, small lot ports and wines. The Prager’s are always there to great you, and guide your tasting. The intimate tasting room invites conversation, and with great music playing in the background is the perfect place to experience these fantastic hand crafted wines.